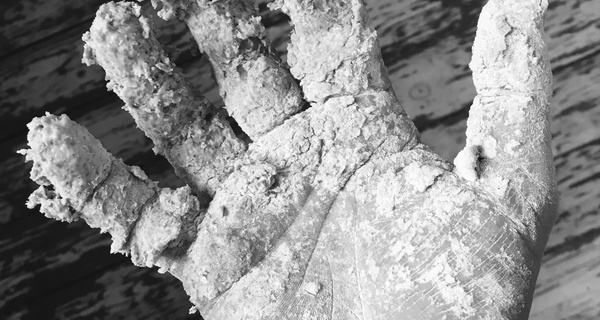 The Bakery Of Slow Ideas #1: Getting Your Hands Dirty

About a month and a half ago I got arrested. It went like this. I wanted to go on the Extinction rebellion

direct action on the 17th of November. The intention was to shut down five central London bridges in a peaceful obstructive direct action. The aim was to bring to attention the lack of action that the government is taking in the current ecological crisis. We are now in the 6th Mass extinction. 60% of all species on the planet have become extinct in my lifetime. IN MY LIFETIME. There is overwhelming evidence that suggests we are entering into critical ecological territory. XR demands that government take action now. 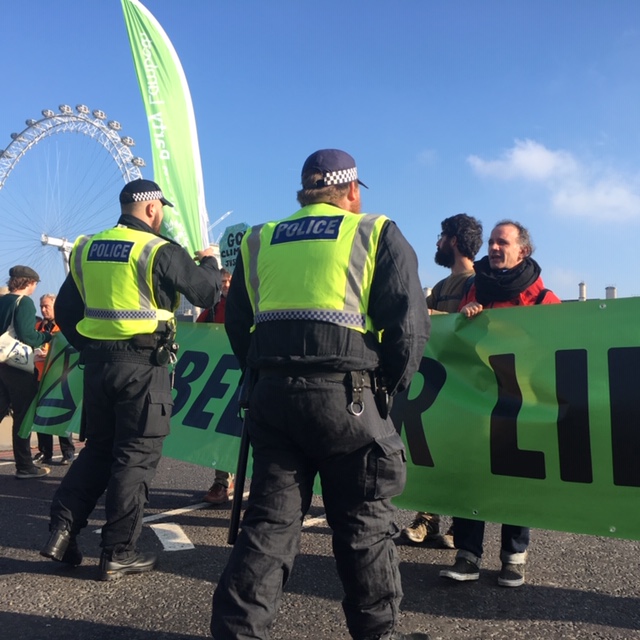 So I wanted to be there, to support, to be counted. Friends came from wales to engage. We met, they stayed at mine. We talked and as we talked it transpired that they were there to get arrested. Interesting. I hadn't really thought about that. So the next morning we were on Westminster bridge where the police had ‘allowed’ a protest to occur; having chats with other protesters and with engaged police officers in baseball style hard caps, not a truncheon in sight… a very specific strategy in place. I and a friend headed over to Lambeth bridge where one of the other four ‘illegal actions’ were occurring and we sat in solidarity and added to the obstruction to traffic. Immediately a police officer came and crouched next to me politely asking me to move on.

I said ‘no’,
he said, ‘you do understand that you are obstructing the highway and that that is a criminal offense’
I acknowledged this as being true.
He continued ’so would you move please’
I declined.
He said ‘if you don't move I’ll have to arrest you so I ask you one last time would you move’
I said ‘mmmm no I’ll stay’.
He said ‘If I arrest you, you might get charged, if you get charged you could get convicted, if you are convicted then you will get a criminal record and this may affect your employment possibilities and ability to get visas to places like the USA’.
At that point, I quietly and quickly stood up…. Thinking mmmm America… the land that with great ambivalence I have just applied for funding to spend several months in, continuing the research for my current practice…

So I shuffled over to where my friend was seated having a similarly cordial dialogue with another officer of the law and bending at the waist I muttered in his ear… ‘mmmm so, I haven't thought this through so much… my research… America…conviction,... Visas’

He said ‘I don't think they are charging people’...

This didn't really reassure me or sort my conundrum… ‘I don't think’ wasn’t a convincing argument to my ears, so I moved on. Next approaching a legal Observer in a high vis jacket with a notepad in hand taking down arrested peoples details. I asked him whether, with my possible near future activities, in my shoes, he would get himself arrested and he replied ‘No I wouldn't but then I’m a legal observer, I’m a coward’... At that moment I turned around to see my friend gently escorted to a police van. I was suddenly there on my own in a crowd. I thought about my feelings surrounding America. How I felt conflicted about how to journey across the Atlantic, to further research a practice grounded on ideas of slow consideration, of thinking before acting, of becoming aware and responsible for the collateral damage of our actions; Collateral Damage to the ecologies within, in-between and surrounding us.

My options were, to sail. The mode most congruous with the ethics of the work? But the time and the timing just aren't falling into place with the funding results and planned activities. I thought about Cargo boats but with a little research on 'The Greenest mode of transport,' it became clear that my action of investment in a passenger journey with freight would pump 12 days of sulfur saturated toxicity into the oceans. just 16 of the world’s largest ships can produce as much lung-clogging sulfur pollution as all the world’s cars. And all cargo boats put together emit over 1 billion tons of carbon dioxide a year. They are as environmentally problematic as aircraft but with much less media attention. Or do I fly with the obvious parallel implications and contributions to the unsustainable human imposition on global well being.....so I question whether this research justifies the damage that it causes and there really isn't an answer…

Donna Haraway in her most recent book: Staying WIth The Trouble talks of Tentacular responsibility. That a way to understand ones societal, ethical responsibilities is to think of ourselves as an octopus with tentacles that stretch across the globe. That these tentacles represent our ethical responsibility for a problem in the world and are made thicker and more robust by our emotional, cultural, ancestral, historic relationship to these issues. By recognizing which of these tentacles are the strongest we can begin to draw lines of allegiance.

The thesis of my current practice is that we need time to think, to dialogue, to exchange, to recognize responsibility and impact, to understand the complexities of the ethical landscape that we are now inhabiting. From this space and time, emergent thought can sprout and we can begin to consider how we need to change our perspective, position and our action to attempt to sustain healthy giving, nurturing contexts for life on this planet.

I have flown a lot in my life, for work, for love, for pleasure. And now I am trying not to fly where possible. Maybe I consider the action of not flying like drawing one of these lines. A line of allegiance, a line of resistance. A line you attempt not to cross. Like being vegetarian, not eating MacDonalds, not shopping at Primark, or eating dairy. Arbitrary lines of resistance in this web of implications that is impossible to escape. But this impossibility to escape your contribution to the ills of the world does not mean that there is no point in drawing these lines and adhering to them. These lines, if nothing else, reinforce one's convictions, one's ethics, one’s ability to speak out when called to.

This chalk line I have drawn makes the crossing of the Atlantic difficult, troubling.

With these thoughts in mind, placing the ethics of the project in front of the location of research, I walked away from my high vis observer friend and I sat down on the tarmac on the bridge and had a little think… and within moments was, myself gently escorted to a police van, to a police station, and into a cell. 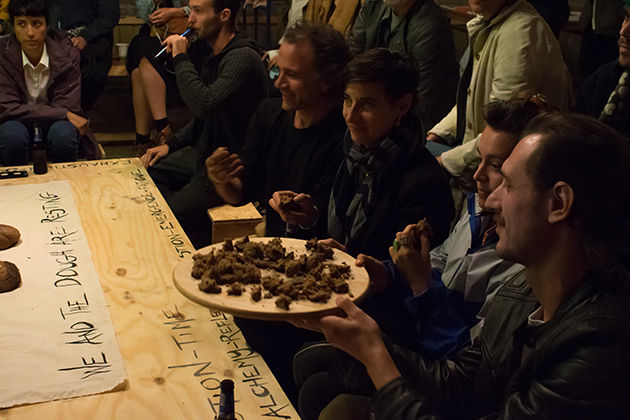 This post launches my new strand of practice: The Bakery Of Slow Ideas. The project is a slow drawn out cry for space and time to think before we act. Time that is eaten by our current societal obsession with justification/survival through production and product (by any means necessary)  over consideration that the means (process) is the bedrock for ethical practice and the context within which we can shift our relationship to self and other.

It places sourdough bread baking, vegetable fermentation and dialogue at its core. It is about concern for three ecologies. The ecology of what goes on inside us (the microbiome). The ecology of what goes on between us (humans) and the ecology of what goes on within, between (us humans) and the interplay between humans and the nonhuman world. It is about responsibility, care, and timescales of action. It is about exploring alternative strategies to the hyper-productivity that is a central tenet to capitalist growth driven societal norms. Part durational participatory art practice, part baking workshop, and part dialogue. We mix, we talk, we think, we rest, we bake, We eat and we leave essential space for the creation of collective, emergent thought... from which action can emerge, coherent and integrated.

The title of Donna Haraway's most recent book: Staying With The Trouble suggests the necessity to accept that we are implicated through all of our actions in 'the trouble' that is to be human now, on this planet. A planet which, through our continued actions of survival, profiteering and ‘progress’, we are rapidly destroying. This blog and my current practice ask: How can one stay with this 'trouble' without being stricken with guilt or grief to the point of inaction? How can one create open dialogical space for deep consideration of the impact of one's actions? & How can one recognize ones responsibility whilst finding the energy to act creatively and politically on what one feels most able to positively affect?