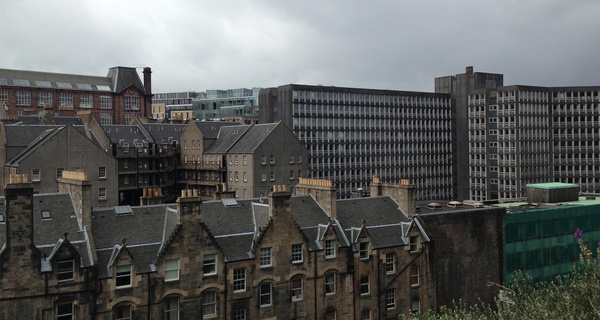 A review from Exeunt Magazine: Only Wolves and Lions

This summer Forest Fringe hosted a short run of Only Wolves and Lions during the Edinburgh Festival. We performed at Forest Centre Plus, an amazing artist-led space occupying the city's old Job Centre (the big building in the picture).

Catherine Love from Exeunt magazine came along and included this passage in her article about her time at Forest Fringe, which looks at the presence of community, time and possibility in a selection of shows.

Here's what she had to say about Only Wolves and LIons...
"...I’m reminded of this moment later the same day in another Forest Fringe show, this time at the Forest Centre Plus on the other side of town. Towards the end of Only Wolves and Lions, a spirit bolstering three hour retreat from the madness of the Fringe, we all share a few minutes of silence together. Having shared silence with a community of strangers twice in one day, it’s startling to reflect on how rarely we sit in silence with one another. There’s always noise, always some interruption. To switch off that noise and step briefly out of the busy flow of everyday life feels at once like a luxury and a strangely radical act.

Only Wolves and Lions, which by its own confession has something of a paradox at its heart, deliberately occupies this comforting yet radical space. It takes the form of a meal, collectively cooked and eaten by a group of strangers, each of whom contribute a raw ingredient. It attempts to be radical in its collective gesture and in its debate, but it knows that it is also inevitably nostalgic. As performer Unai Lopez de Armentia acknowledges in a childhood anecdote about his native Spain, the gathering of communities to cook, eat and talk together is a tradition that seems to be gradually dying out. As we perform this piece together, we are clinging onto something as much as we are trying to craft something new.

Whatever its internal contradictions, however, Only Wolves and Lions is a beautiful, generous, heart-swelling experience. Its simplicity works in its favour, using silly games and the necessity to work together to forge a sense of community far quicker than other, more seemingly sophisticated pieces. Together we concoct recipes, cook them and enjoy the resulting feast.

Nothing particularly innovative, but the warmth generated by these collective activities is quietly extraordinary, reminding us that the sharing of food is as much about ritual and relationships as it is about nutrition.The experience also does something strange to time, which moves at a different pace to the relentless treadmill of the festival outside. Moments stretch out, inviting the possibility that the time for these rituals is there if we only make it. Thinking about this and about I Wish I Was Lonely earlier in the day, I privately resolve to set aside a week’s holiday in which I will switch off my iPhone and cook three course meals with friends every night."
[Catherine Love - Exeunt Magazine]
Full article...