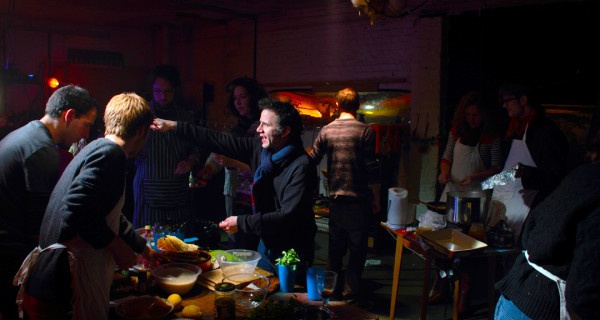 Here is an artcile I wrote for this week's issue of Exuent Magazine about (as the title suggests) performance and collectivity.  It's my first ever published article, I hope you like it!

Artist Leo Kay reflects on his show Only Wolves and Lions, exploring the communal act of sharing food as a portal to connection, reflection and transformation. Kay is co-founder of performance company Unfinished Business together with producer Anna Smith.

This every day activity provides a secure structure within which we explore ideas surrounding community, loneliness, isolation, collective experience and its relationship to happiness, free market capitalism and the meaning of the word crisis.

The work was inspired by my experience of going though a break up in London, realising how easy it is to find yourself without the support of a community to help get you through the more difficult moments in life. In cities and metropolises across the world, where more and more people are choosing to live alone, the notion of community in its traditional sense is displaced. The act of sharing is undervalued within contemporary urban, social and vocational currencies. At the time, I felt strongly that I needed a community far more than space or belongings; it was time with people, that positive interaction which brought fulfillment. I became interested in exploring philosophies surrounding happiness- what it means, how it manifests itself, what elements of this experience do human crave and what actions imbue us with a sense of well-being.

I was struck by the writings of the ancient Greek philosopher Epicurus, the founder of one of the first documented communes where the sharing of food and conversation were central to his philosophical teaching on wellbeing, and resulted in the creation of a School of Philosophy which he named ‘The Garden’.

It was in the encounter Alain de Botton’s explorations and conjectures on happiness where the piece really developed. De Botton introduced me to the quote which named the show, “Only Wolves and Lions eat alone, you should not eat not even a snack on your own.” If for Epicurus food was central to an understanding of communal activity, it seemed for Botton it was its essence. I considered how I might be able to construct such a space in which the act of sharing becomes essential to raising communal wellbeing. For Epicurus, it was the positive repercussions of sitting down and sharing the basic necessities with one another that took precedence; our physical hunger as well as our hunger for meaningful social interaction could be satisfied this way. By creating and sharing food, opportunities to discuss anxieties and worries, exercise collective creativity and consider such social philosophical ideas emerge- fundamental practices as articulated by Epicurus.

To what extent does the current economic crisis and the social structures promoted by Western capitalism play with our sense of isolation and dislocation? A political system has a great deal of power to manipulate our perception of happiness and where it can be located. I wanted the structure of the show to trigger points for the participatory conversational discourse which opened the event, and tackle such politically rich questions.

There’s a subtle narrative throughout my work that becomes visible in this piece. When I created Unfinished Business I wanted a framework to develop work that explores intimacy, interaction and participation. The site as a stimulus for a experience in performance leads to the possibility of a space where transformation can occur between both audience and performer. Initially I thought academia might be a safe space to write about and explore the issues of performance as healing. I am not referring to performance as therapy, but finding latent within the act of performing the power to heal those who participate.

Although a devising process offers a different space for consideration of these discourses, there’s a cumulative knowledge built throughout my work, from my last show It’s Like He’s Knocking through to my interactive performance pieces. These have allowed me to not only explore these issues within a collective context, but also engage with a practical argument rather than theoretical analysis. I am interested in the depth of experience that could be facilitated if the audience is both receiving performative information and at the same time engaged in action, embedded in the politics of the live event.