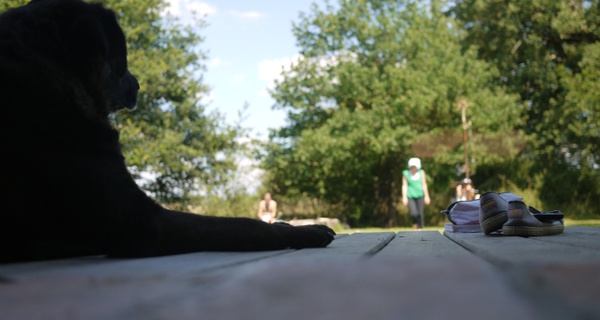 Leo's Blog: A rip in the fabric

This summer was full. I committed to London, I traveled with work, the company performed in France and Greece and I created a workshop that connects people, anyone, with their reasons for doing what they want and need to do.

I learned again about mortality. I saw someone I love step close to the edge and look into the abyss and then come marching back.

It feels like mid summer today, a gift when it should be over.  Today I’ve ridden across London to a meeting in a Kentish town cafe, a hide away. A meeting with my current collaborator, Polarbear (I am directing his new show: Old Me at the round house) now I am back with an hour free, so I’ll start to recap on what’s happened over the summer and bring this page a little up to date…

A week-long workshop and performance residency in the South of France.

We finished the tour of It’s Like He’s Knocking with a residency at Au Brana a performance research space near Toulouse, the South of France. A space run by very committed and creative theatre makers who came out of Rose Bruford, European Theatre Arts Degree BA, some years ago. They had a vision, found a farm. Re-shaped it and built it with their own hands through harsh winters with no roofs, skint and under supported.

It is now a beautiful theatre training space near a forest and water, with a newly lain wooden floored, 200 year old Barn.  A space capable of holding workshops for 30 and performing to 80.  Accommodation for up to 20 and a big kitchen with a long table where every one eats tastey local produce.  It is a space where performance research is promoted and where experimentation is celebrated.  I have been invited to run two, week-long workshops there over the past couple of years. I have woken people at 4am to run in the woods, at 6 to sing to the sunrise and in the first year there, had a sudden need to work through the day without breaks to embed the performance concepts being explored in the workshop. This change was greeted with a flow of snacks brought to the workshop space. They nurture, support and celebrate the nature of process.

This year I ran a week long workshop looking at my current performance preoccupations: Intimacy, participation and interaction and Anna and Carlao came to join me to perform two shows of It’s Like He’s Knocking in a small sitting room in the farm.

It felt like the perfect celebration for the end of a rewarding tour.

The preceding weeks workshop was an intense and revealing process that demanded people create work connected to their individual creative and ethical drivers. It demanded that they dig deep and find an authentic expression, connecting with personal Biography and creative context. I invited the final sharing to be participatory and gave the option that it could be a one on one experience. One of the greatest achievements of the work was that in the final sharings, I felt I was really meeting the performer and that they were not afraid to share part of themselves with me. As a gift. This connects deeply with much of the work that I am doing from my solo show: It’s Like He’s knocking through the one on one and interactive performances developed for Live Art Speed date, Scratch Interact, Fatoria Des Fuegos and Forest Fringe and finally explored in our current project; Only wolves And Lions.

My reason for interaction and audience participation is to try and give more of myself and allow audience to integrate themselves into the performance with the hope that this will create a space where change is possible.

Inspired by a desire to change, current research into alternatives to capitalism, our obsession with materialism and the gift Manifesto written by Andy fields, I recently devised a one on one performance where, after asking the audience member questions about happiness peace and anxiety, I gave them something that belonged to me. Something that I valued and wouldn’t normally want to give away. something that I hoped connected to what I had learned about them. I hoped this rip in the fabric of social protocol, would surprise the audience into questioning their relationship to possession and the current status given to ownership and its subsequent relationship to our happiness.

This is a theme that we are continuing to explore through workshop practice and our current performance: Only Wolves And Lions…