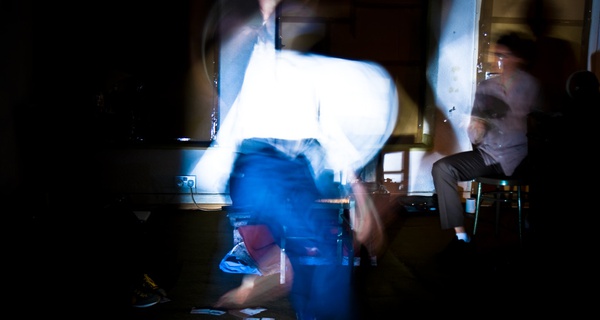 Leo: One thing that has been really clear throughout our trajectory since 2010 is that all of our work has an aspiration to and an association with performance as healing. My understanding of ritual [is that it] aspires to conjure an energy that has a positive transformative force within it, and that might be a force of reflection or a force of action, but it's got a possibility that it will create a positive transformative space.

Maddy: What's the difference between healing and transformation?

Leo: Maybe there's no difference, maybe they're the same, but positive transformation for me moves towards healing, be it mental or physical or spiritual.

Leo's lengthy periods of stay in Brazil, his training in capoeira and his direct experience of Candomble ceremonies have given him a particular appreciation of the “liminal space” or “ambiguous platform” in which it's possible to be both performer and audience. In capoeira, this manifests in the way anyone can enter the martial space from the circle of people that defines its outline; in Candomble in the way that it's possible to fall into trance from the congregation. In both, Leo observes, “There's this strange space between the pre-composed and the occurring right now, and that space is where transformation can occur.”

This isn't something he wants to communicate overtly: “We would never say in Only Wolves and Lions or It's Like He's Knocking, 'this is a space for transformation'.” Instead, the aim is to create the conditions in which audiences experience something that might more accurately be described as “transformative”. In Only Wolves and Lions that experience is the transformation of raw foods into a shared meal, through which it's possible to experience “the change of your relationship to a stranger into someone that you feel warmth for”. In It's Like He's Knocking, that experience is a sense of close connection to the performer, achieved through autobiographical storytelling which recognises that “the more you bring of yourself to the space, the more the audience takes the risk to be and think deeply of themselves with you”.