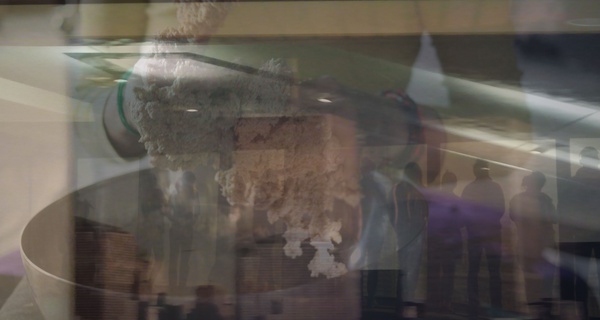 Reclaiming States Of Being # 1:

This is the first post of my blog: 'Reclaiming states of Being' that will accompany my year and a half of artistic research (spring 2017- autumn 2018) at Apass (Advance Performance And Scenography Studies) in Brussels. I am about half way through the process and as some ideas surrounding the project start to make sense (!) I want to capture the journey of my thoughts.

This is a space where I can reflect on the research. The theme could be described as ideas and action that attempt to resist systemic disfunctional demands: speed and instensity of production. I am exploring ideas and processes with alternative (slower) time scales. Processes that reference and take inspiration from natural and organic transformations including ritual performance practice and fermentation practices including and focusing on Sour Dough bread baking! I am also concerned with dialogue as a central tool for disentanglement from systemic disorder: prejudice, inequality and assumptions. The resaearch aims to be about taking heed of  and exploring the process, symbolism and metaphors latent within these subtle, often unseen/hidden but constantly generative acts.

The research is about time, it's about the reclamation/reframing of states of being that are negatively contextualised within our culture. States described with words like stuck-ness, creative Block, Lost-ness, failure, depression. I argue that these states better describe the necessity for a different (slower) temporality or time scale. An alternate relationship to time and action, to that which is demanded by our current post industrial Neo-liberal system. A system that prioritises production and consumption over reflection, processing and integration.

I am attempting to rethink my position and responsibility within the world I share and play a part in; attempting to Stay With The Trouble (D. Haraway) and get my hands dirty.

I want it to be like a scrap book. It is primarily a space to put down half formed ideas so that I can observe the process of growth that is occuring. I hope that I wont be too precious about what I throw down here: sound, visuals & writing scraps, along with resources from the dispirit contributing areas of my research. It may feel slightly random, it will not be 'systematic', it will embrace the time that it needs and therefor will not have 'consistent' output of product. But I hope that if you come accross it and browse through it, it will be engaging, inspiring and generate discourse.