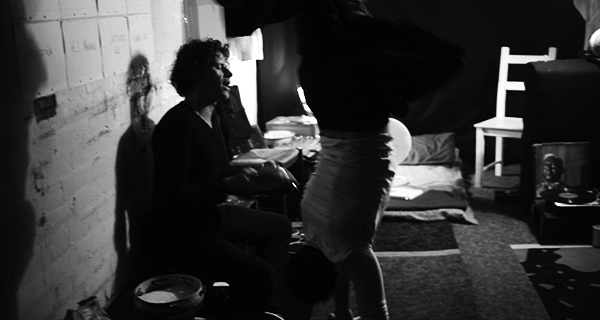 This Lexicon maps a dialogue between summer 2015 and March 2016; an attempt to articulate our company practice through the language we use to describe it.

Leo: Well, a warm-up can be a ritual, a repeatable act which gives meaning and context and a heightened sense of the sacredity of the moment, if that's a word.

Maddy: But do you think of it that way?

Leo: Yes, I do. But the use of the word ritual is misleading for a lot of people within our culture, so –

Anna: It's interesting how it might still be helpful. From working with you, I know you like to use language that you assosiate with to describe what we do – so you don't want to use the word 'stakeholders', there's lots of examples like that. Or structures: you're not someone who likes adhering to other people's structures, or pre-ascribed ways of doing things. I think it's totally valid to say, I'm going to use the word ritual here, and through a process of defining what that means I will find a way to communicate that to other people. I understand what you mean by ritual because I've worked with you for five years, you can get away with saying the word 'magic' to me, but we need to find a way of –

This document began with a proposal, which Leo Kay emailed to me in June 2015. “I would like to reflect on my practice and write something that consolidates my learning over the last few years,” he wrote. “There are various reasons for this: one is that I want to share my learning, as I feel that there are things that could help other emerging artists working with autobiography, surrounding how to negotiate the role of maker/director/performer and how best to support good practice. I am also interested in reflecting on my trajectory as a way of discovering where to go next.” He wondered if I would like to be involved in this reflection, perhaps in dialogue, or in writing, as an editor, or all three? He's someone whose work I admire enormously: it has made me cry and sing and share and laugh, shown me danger and illuminated hope. I couldn't wish for a better collaboration.

Leo's work with Anna Smith, producer (and so much more) in their company, Unfinished Business, begins always in conversation, and here, too, is where the three of us began: meeting regularly as the summer of 2015 shifted and cooled into autumn and winter, in cafes, in their shared studio, over my kitchen table, to talk about Leo's past work, probing always at places of difficulty, often retracing our steps to get closer to the heart of a problem. Although those conversations were conducted in private, it's always been key to us that they should ultimately be public, contributing to a wider conversation. We've edited them into a lexicon because that feels the simplest form for a general reader to navigate.

It's unfinished because... how could it be otherwise? Reflection isn't a one-off process; as the company and its work evolves, so too will its approach to the questions of how best to conduct a rehearsal process, how best to care for makers and audiences, how best to counteract the pernicious effects of the damaging social systems that surround us all but affect us unequally. And language is a restless creature, pulsing and responsive to our shifting interactions. This document, lexicon, represents a moment in time, one that stretches back and reaches forward, and quivers within the contradictions of now.