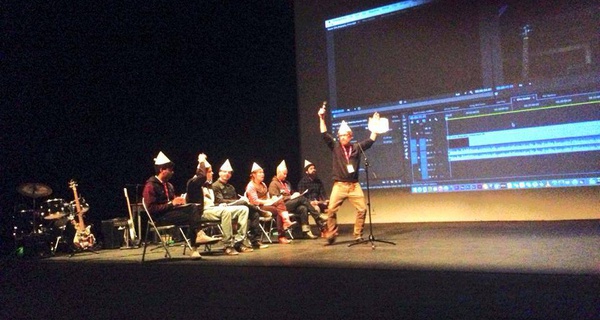 When this reflection period began (June 2015), Unfinished Business were coming to the end of an 18-month shared making process, working with six collaborating artists in residency settings on an autobiographical, psychopolitical performance research, Change My Mind. (The participating artists alongside Leo were: Owen Craven Griffiths aka John Berkavitch, Jo Fong, Ria Hartley, Chin Keeler, Greg McLaren, Emma Tornero.) This work dominated our conversations because, although much positive had come from the intellectually stimulating research and interdisciplinary collaborations, the process had frequently been difficult – and Leo and Anna recognised the potential for learning through “taking apart the negative experiences”.

The key theme that emerged during discussion was a problem of structure. Change My Mind began as a short solo performance for Leo, in which he delivered an eight-minute autobiography, invited the audience to suggest five-minutes tasks he could complete on the spot, which “they fundamentally believed could change the way I perceived the world around me”, then enacted the collective favourite. This initial desire to test his own capacity for change, within a social setting, grew into an interest in gathering “a wider range of artists to explore the same process”. In this group iteration, that process involved recording an autobiographical film, to be shared online and with a specifically chosen “task-setter”; the artist would then receive and attempt to execute the task set, and record a new autobiographical film in response to the experience and in readiness for a new task. This sequence was repeated four times over the 18-month period. Leo directed the project and participated as artist: his intention in doing so was to create a sense of parity within the group, as he would never be asking his collaborators to do anything he wasn't doing himself. What he didn't foresee was his own difficulty in juggling both roles and how this would impact on his ability as facilitator. He underestimated the extent to which pastoral care would be needed within the process, which he later realised “made people very vulnerable and emotionally fragile”.

A sense of risk arose from the necessity of each artist to record, for public consumption, the set of autobiographical films – the first of which lasted 20 minutes. Leo and Anna believed in the documentaries as integral to a project concerned with self-reflection and analysis of personal change: “The idea of being able to watch oneself and others change through these shifting videos over the course of time felt really important to the process,” says Anna. They also felt the films were needed for funding applications: by sharing them online, Unfinished Business could argue for and demonstrate a wider audience reach than might be expected for an experimental performance research process. This meant that, during the residencies themselves, when artists (including Leo himself) occasionally expressed qualms about the exposure of online sharing, Leo and Anna didn't feel any other options were possible. In attempting to avoid concentrating power in the room, they inadvertently gave this one idea supremacy.

Through its slow development, our conversation recognised the difficulty of creating a genuinely non-hierarchical space, one that is ceaselessly flexible and responsive, within the constraints of time and money often imposed from outside. It also recognised the impositions that Leo and Anna sometimes, and unwittingly, shape themselves.

Leo: There's a confusion which I need to reconcile, around having the confidence to recognise that my process is both for peers and for emerging artists. I think working with six peers who are very self-possessed and have strong careers in their own practices was quite intimidating: I didn't want to impose form on them, I didn't want to impose content on them, I wanted to suggest a process.

Maddy: Although as a leader you were trying not to impose a process, as an artist you had a process, which was to create the autobiographical films – and then that became the process that everyone was involved in.

Leo: – which is absurd because people were only committed to it for a week every three months –

Anna: – because of the practicalities [funding restrictions]. But you had set it up, this is your process, and it was laid out very clearly, so while within those [residency] weeks there was room for deviation and collaboration, actually everyone had signed their life away to your process at the beginning. Although it was this big unknown, there were these anchors, which were the things everyone had said yes to.

Leo: So do you think the process was a big lie?

Anna: I don't think it's a lie, but I think there's a big tension between the idea that we're all equal collaborators, a self-organising group of autonomous individuals working as a collective, but at the beginning we all said: ‘Yes, Leo Kay, we're all going to do this.’ The tension within the group, which came at different moments for each person, was in standing back and recognising: I'm supposed to be free and expressing what I can bring to this and discovering things and not know what's going to happen, but at the same time I have to do these things I've said I'm going to do, and what if I don't want to do them right now, and what if it doesn't make sense for where things are at? The structure took on this weird power within itself where it couldn't be changed. It was like a group member who was less flexible than the other members of the group.