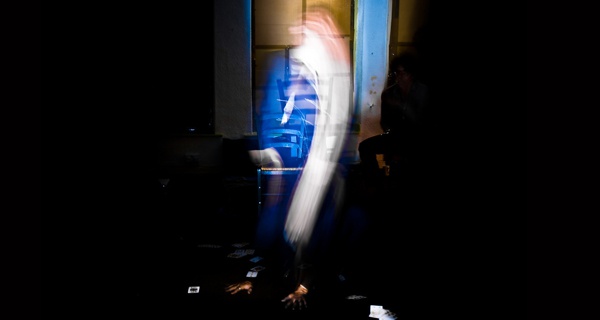 Even if there were other words to include before this one – conveniently, there aren't – ancestry feels like the right place to start. My oldest friend, playwright/author Samantha Ellis, says: “You have to know where you've come from to know where you're going”, and that spirit ignited in Unfinished Business the desire for reflection.

Central to this project is an acceptance that to look backwards can be to encounter complication. This might present itself as an uncomfortable acknowledgement of the privilege – which includes, for Leo, being male, white, middle-class, cis-gendered, heterosexual – that is as much a part of one's journey as graft and craft and the overcoming of painful and often invisible disadvantages experienced by every individual.

Leo: I've always struggled with class division, and not wanted to feel like just because I landed in an upbringing that wasn't the same as someone else, we were fundamentally different. That has had a huge knock-on effect on how I pursued my career or interests. It's taken me until now to allow myself to start to explore performance art and live art, and be all right with the possibility that I could receive criticism for this overtly ‘arty’ context and association.

In its relation to autobiography, ancestry has been central to the development of Leo's work: the first solo pieces he made (Stop, 2001; A Geographic, 2004) were based on what he knew of his grandfather's life, especially as reflected in his own. But it's not a word he associated with until he became interested in Candomble, one of the syncretic religions practised in Brazil, while spending long periods working in the country between 1999 and 2007. When his father died in 2007 Leo had been researching Candomble with the high priestess Mae Iara, who welcomed his presence in part because of her desire to rebalance the negative racialized image (voodoo, black magic) that has been imposed on this African diasporic religion. The closer Leo moved to the rituals and awareness of ancestral impact on present experience which are central to Candomble, the more these things became important in his own life and work, notably in the making of the solo show It's Like He's Knocking (2009).

Leo: It was a very visceral process of understanding. The creation of tacit knowledge through experience. I didn't have any clear religiously aligned spiritual beliefs, and had nurtured my own sense of the need for some form of spirituality and ritual in my life. Candomble started to become an anchor, a reference point, not only in terms of the mythological context, but also in the energetic space that the rituals created and that I experienced in Brazil. What I've realised is that the way in which Candomble explains the journey of the dead towards enlightenment, and how they experience ancestry, has influenced me and my practice in relation to an awareness that the conjuring of your personal or cultural history into the space of a performance can dig deeper roots, so that there is possibility of an opening for greater depth of experience for audiences encountering the work.

But the spiritual connection afforded by a developing relationship to Candomble was, Leo emphasises, wholly enabled by the social and cultural privileges that won him a grant and permission to film its ceremonies. Which returns us to the problem of privilege, and opens up thoughts regarding the necessity of decolonialism, not only physically or geographically, but also within our individual and shared consciousness.