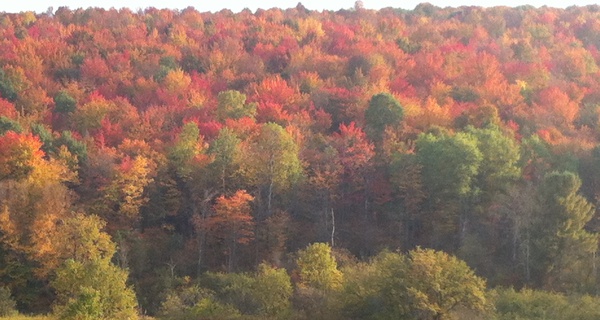 Leo's Blog: Candomble, Exhibit B and Me

I’ve just returned from a two-week fiery, tree filled, autumnal journey in the state of New York. For the first week I was working in NYC with Baba Israel, Yoko Prodis and Talvin Wilks on the ever evolving and exciting project that is The Spinning Wheel. After a few months away from it, we’re now starting to get the show ready for its’ first UK tour in November. Catch the new trailer here.

From NY I travelled up state to Hamilton. A small town which houses an elite undergraduate college called Colgate. Through a series of fast firing impassioned emails, I had been invited by Milawan presidential professor of Philosophy and Religion, Harvey Sindima, to the Liberal Arts College to give two performance lectures/dialogues; including the presentation of film material, storytelling and a Q&A. Harvey specialises in Religions from the African Diaspora and having seen information online about my research into Candomble (the Afro-Brazilian animistic religion closely related to other religions of the diaspora including Santeria, Vodou and Obeah), had asked me to share some of the material and preoccupations that I'm considering, with his students.

During the time I have been away the proposed staging, protest and subsequent reactions surrounding Brett Bailey's performance exhibition 'Exhibit B', an attempted critique of ‘human zoos’ (where African's were displayed as opjects across Europe in the 19th and early 20th centuries), have all taken place.  As the debate unfolded, it felt, in some ways, as potent a phenomena and as important a moment in my understanding of the British cultural landscape as the uprisings that took place after Mark Duggan was killed in 2011. This may seem like an over dramatic or inappropriate relating of events, but my depth of thought and developing understanding through communication, reports and social media have felt of a similar intensity. I’m usually uncomfortable about sharing my politics on social media and prefer to keep a low profile. But with people close to me both personally and professionally who are either intrinsically linked to the staging of the work or personally affected and politically vocal about their opposition to it, the situation feels like a complex plate of interwoven spaghetti to me, which I will attempt to reflect on within this blog.

I am a third generation Russian and Czech/German immigrant and have always identified myself as one. I also share many traits with Brett Bailey. I am privileged; white, male, middle class and of European decent. Many doors are open to me. Were I to be of any combination of traits outside of this ruling societal construct I may find it harder to access the privileges that I have. This is an important factor to me when considering my political stance in relation to ‘Exhibit B’. I believe the artist is always present in the making of the work of art and though it maybe a controversial stance; I believe that an artist is responsible for the affect their art has on those who are confronted with it. I believe there is a difference between offence and inflicting pain on others. From the articles that I have read it feels clear to me that this piece of work both caused pain to members of the black community and possibly reopened trauma.

I remember in my early 20's rebelling against the idea that conceptual art needed an accompanying essay to understand the artists’ intention and prepare the audience to read the work in the intended manor. Now I am of the belief that framing is everything. I believe that Brett Bailey had a responsibility to frame the work, to contextualize the work and to understand the culture within which he was presenting it. Sometimes the scale and ambition of a vision excludes the possibility for a depth of communication. I feel that this project would need an incredibly deep and embedded framing of pre-organised discourse and dialogue with the commented upon community for there to be a level of authenticity reflective of and acknowledging the pain suffered. It seems there was nothing planned, which suggested a lack of sensitivity and it felt like Nitro were put in a position of incredibly high stress, trying to manage the ensuing crisis.

I don’t believe that the production as it was envisioned, with the lack of conceptual framing and lack of desire to use it as a tool for discourse, should have been shown in England. Not that I believe in censorship; I don’t, but I also don’t believe in causing pain to communities, who are still discriminated against. I didn’t form this opinion at the moment I heard about the production, before I read the continued political discourse surrounding the production, rather it is a reflection that has formed recently and one which is deeply connected to the project that I shared with the students at Colgate in Mid State NY last week.

The lecture/dialogue is about a documentary that, after nine years of development I still haven’t made; the working title is ‘Candomble: a documentary, 9 years in the not making’. Having been invited into a Brazilian community who practice the animistic religion of Candomble, as a friend and a filmmaker, I have collected over 100 hours of footage and to date have done nothing with it. The presentation deals with how my position and the responsibility I feel for both the community and the culture that they manifest, has stopped me making a documentary. Within the encounters and conversations that these presentations triggered I felt I was able to align my thoughts, my politics and my intentions in the articulation of responses and aspirations for the future of the work. But still I am torn and feel I must go slowly. I want to consider how to honour the community as a collaborator in the film and how to support their growth and dreams, initially through the division of financial remuneration and the dissemination of information.

Fundamental to my aspiration to engage in honest dialogue throughout this project are key considerations surrounding the themes of inequality, sensitivity, responsibility, and entitlement and how I can acknowledge and attempt to understand better my position of privilege and the implications this has within the making and dissemination of such a piece. The images of the religious practice and surrounding activities takes up 8 minutes, the story I tell 20 minutes and the Q&A lasts for another 1-2 hours. It was in the Q&As that I felt the depth of the subject was really addressed. The issues are heavily related to the sensitivity that I believe should be engaged in when coming from an imperialist cultural context and commenting on or presenting cultures from colonised nations or the slave Diaspora.

I am still in the throws of considering if I have the right to make the documentary, but am attempting to address these issues through opening dialogue to those I present material to and asking for these ethical issues to be at the forefront of the work. I am acutely aware of the access that my position holds within our culture and wish to be a part of the movement to readdress the balance of power to reflect the cultural make up of our society. But at the same time I can feel that I am resistant to censor my expression in an attempt to rebalance the scales. I am also torn as an artist and working out where to place myself. This could be said to not be my battle, but I think that it’s everyone’s battle. To accept our individual given role, status, power within society in an attempt to be aware enough to redress injustice and promote equality and freedom; to accept the impact that our forbearers acts of violence and domination against others have on contemporary societal structures.  The black community still suffers racial oppression and under representation in many positions of power here in England.

And therefor the act of putting on a performance that suggests that the ‘human zoo’ is far enough away from our current experience that it can be represented by a white man of colonial decent is clearly problematic.

Maybe some people will take offence to me constructing a live documentary/performance lecture or subsequent documentary/teaching aid, using material from a cultural phenomena not associated to my own. And maybe some people will feel I am treading too carefully through this field. However, rather than contributing to the imbalanced and prejudice of our cultural norms, I want this project to be a part of the attempt to readdress it through stimulating dialogue.

During the Q&A with students at Colgate, their was one African American student who had his hand up to ask a question. In the class that I had sat in on earlier that day there was a discussion about privilege and this African American student stated that he was not privileged. Harvey suggested that the very fact that he was sitting in this classroom, study grant or not, meant that he was experiencing privilege of some sort. I took from this that he was not one of the 95% of fee paying students, but one of the scholarship recipients. In the Q&A that night, he held his hand up patiently and Harvey went round asking students, in the order that their hands rose, but when after three questions had been posed he was still not picked he dropped his arm in frustration and despondency. My subsequent reading may be symbolic or factual, but I read from his body language an inevitable acceptance that he rarely gets picked, rarely has access to a space for his voice to be heard.

Since being in NY I have heard the term ‘Micro Aggressions’ used several times to express the continued and subtle forms of racism that the non-white community experience on a daily/hourly rate. It is implied that these aggressions eat away at individual self esteem and the energy needed to fight for your right, for your space. When he was eventually asked for his question it was a pertinent one and one of the only questions I did not have an easy answer to. I am still undecided of the future of my project but I am sure that I wish to be part of positive change within our multi cultural community. I think this means listening and accepting responsibility for both what one represents and the role one can play.