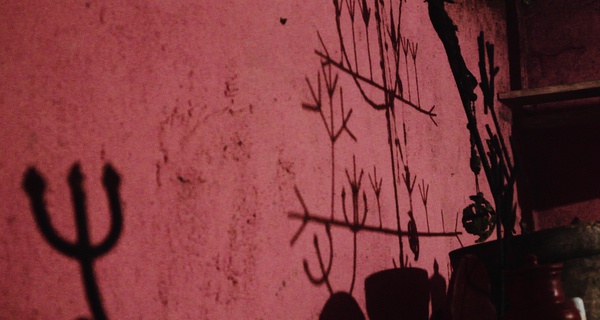 The invisible work of Leo's life over the past decade has been with a Candomble congregation in Brazil: on the invitation of its high priestess, he has filmed its ceremonies and rituals, with a view to making a documentary film about the religion and its practitioners. It's invisible because the film remains unfinished: not because he hasn't enough material, there's hours and hours of the stuff, but for other reason, most importantly, an intensifying discomfort with what the final documentary – indeed, his access to the congregation, and his ability to film in Brazil at all – says about his unconscious exercising of privilege.

For Leo, this is a conversation about: “the ethics of ethnography within postcolonial contexts and how one places oneself in relation to other cultures, as a member of a colonising nation”.

As the Candomble Project is a work-in-progress, so is the discussion. It begins with exposing the myriad insidious ways in which our past is alive in our present, and not being silent in the face of these. It begins with recognising that colonialism didn't end with the independence of former colonies; that its legacy thrives in ongoing racism and social inequalities, in the abuse of natural resources, in the violence of capitalism.

Leo (via email): Decolonialism has started to become an incredibly holistic subject for me, although it’s also an overwhelmingly large subject, one that I do not and cannot claim a deep knowledge of or agency within. From my limited understanding I recognise that a consideration of the subject is intrinsic to redressing fundamental problems concerning almost all key issues within contemporary society, including our relationship to race, to sex, to gender and to ecology, and the onslaught of colonialism through capitalism. From my position within society this consideration seems to ask how to break the hold that the system has over my perspective and consider other ways of communicating and engaging with each other and the world around us. When I mention decolonisation of the mind I am considering the need for us to recognise the rigidly structured frameworks within which we are born, and nurtured, how they create difference in opportunity, and the need I feel to act with integrity in an attempt to decondition oneself. I know I have a long way to go and that sometimes I have more energy for this than at other times. But I recognise decolonisation as a frame through which we can look at everything occurring today and take action towards positive redress and change.