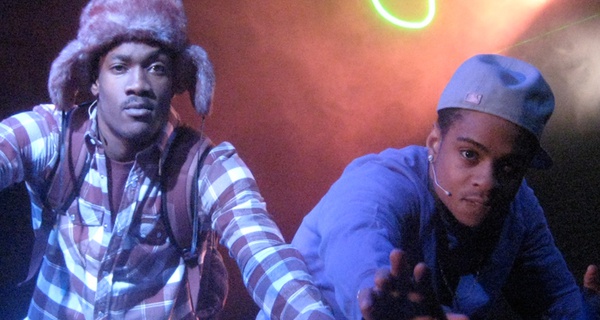 The words in this lexicon frequently overlap, folding into each other as though interchangeable. Sometimes that blurring is useful: for instance, when “facilitation” is used to describe Leo's work with peers or non-professional groups alike, the necessity of taking responsibility for offering everyone emotional care, even those with an established art practice, becomes clearer. But some teased-out focus is needed, too.

In this section, I'm using facilitation specifically to refer to the work Leo does with people who are not professional artists. I do so with an awareness that Anna contests it, because it seems to elide the differences between facilitation of a workshop and co-creation of a performed work, and that I'm possibly ignoring the specificities of the different social groups taking part. The Decypher Collective, a group of grime MCs assembled by Birmingham Rep, with whom Leo made 8sixteen32 (2008/9), were very different from the Young Actors Company based at Contact in Manchester, with whom he made The Third Side (2012), and they were very different again to the young people who have experienced homelessness with whom they worked in Blackpool to create a version of Only Wolves and Lions (Walk, Talk, Eat With Me, 2015). These differences affected not only the care required to work with each group, but the kind of work they could make.

By the time Leo met the Decypher Collective, they had already dismissed two directors. “They were teenagers who were highly intelligent and highly creative and had been burned by the whole of their educational context, so they could smell shit and were ready to kick off,” Leo says. “When I started working with them, I realised immediately I had to be myself, or as much of myself as I could be: I respected the differences between us and vice versa, and that made us closer. What we connected on was that I could teach them things they didn't know: theatrical structure, physical poise, physical expression and creativity, playfulness, timing in articulation of their words...Theatre, basically.”

Socially, the project was one of the most satisfying Leo has been involved in. “To see these teenagers evolve into young-adult artists and for them to have a high level of self-esteem in association with the project, that for me was amazing – and quite an important benchmark for what I find worthwhile.” Artistically, however, he had to accept that he couldn't be as radical with theatrical form as he would have liked. “Having six grime MCs working long-term inside the Birmingham Rep theatre and on their stage is already breaking convention within our culture, so you have to choose your battles. But all the tricks of physical theatre and music theatre and playing with the fourth wall felt slightly retrogressive for me.” And yes, he recognises the ego involved in saying this: but when he works, he wants to feel stretched, that he is pushing himself and exploring the most current and efficient way of expressing the ideas latent in the content. “So there's a schism, because I know that if I want to work with emerging artists and vulnerable participants, they often need the process to be held really well, and to be held really well often means you can't experiment quite as much with form as they may feel too far outside their comfort zones and rebel against suggested ideas.”

Working with the Contact Young Actors Company, where the context was one of invited or expected theatrical innovation, he felt more able in his staging to mix artistic media – movement, video projection, visual art (at one point, the group painted their bodies and splattered themselves against the back wall) – with politics and philosophy. There was vulnerability in this group, too: one actor had Prader-Willi syndrome, a rare genetic condition that comes with a host of behavioural problems, including anger and stubbornness, and generally the young people crossed class and ethnic groups. But the lack of homogeneity was helpful: “Because they came from lots of contexts, they didn't feel the need to hold on to or affirm each other's identities: they were constantly compromising.”

At the time of our conversations, Leo's most recent experience of facilitation work was with a group of young people in Blackpool who have experienced homelessness. While he felt “the outcome was successful, in that the audience were very moved and triggered and empathic in relation to the participants, who had an opportunity to share thoughts and ideas”, he was also exhausted by the stresses of the process, the sensitivity of working with extremely marginalised people, combined with a time pressure which meant he felt unable to use care structures such as the check-in at the beginning of the day, in which all participants share how they're feeling. It was, says Anna, a “confusing” context, and as such, Leo recognises, required the most “conscious” process possible.