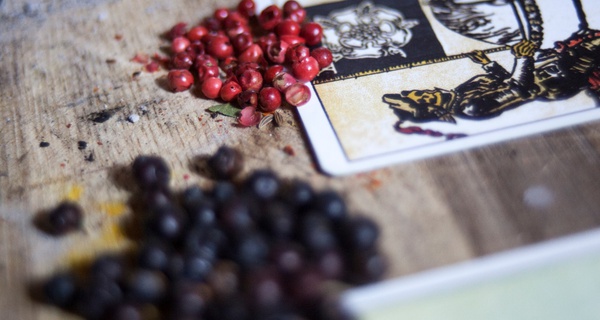 Separating the Wheat from the Chaff # 5

Allyship, empathy, divination and other forms of collaboration

#5 part 1: We already have the tools we need

These last two weeks I have been running a series of online and in person workshops titled Holding Spcae: Solo practice in creative collectivity. I have been playing with irreconsilables - opposites that sit uncomfrotabley in the same moment. One being the desire to leave space for emergence, for those who are participating to contribute of themselves and influence the structure and content of the workshops, whilst at the same time holding a beneficial and enriching experience. Another is the individual and the collective being present in the same moment, attempting to hold this truth - walk the tightrope. Structure and the unknown walking hand in hand, the graspabale and the ungraspable sitting uncomfortably side by side. Being comfortable with this uncomfortable marriage.

The workshops are - as collective improvisations tend to be - in someway about training for human interaction and in my mind they sit under the title of an as of yet unmade project: Rehearsing for our futures together.

I want to become increasingly comfortable with uncomfortable spaces, where we lean in, where we accept that some healthy conflict is generative. Spaces that propose an ongoing motion between conflict and harmony. Instead of falling into brittle opposition, isolation, polarisation, I want to learn how to sit with and embrace the unnerving presence of difference.

The invitation to imagine alternatives to our waring and brittle reality can be daunting, but maybe we don’t need to imagine new alternatives as much as lean in to, trust ourselves and recognise old tools.

"We discern that the urge of the times is not to fix a broken system, but to acknowledge our inherent power to summon other worlds. We know a way. Our cultures teach us that in turning to each other, we become disruptive to old realities and hospitable to new ones. Because we will not co-create the world by proxy, we need to turn to ourselves again, and rekindle the realness we have lost.’"
Bayo Akomolafe and Marta Benavides, Times Are Urgent: Lets Slow Down

I recently had a brilliant Tarot session on the phone with a woman based in southern Ireland who I believe is very gifted (DM me if you want her contact). I didn't enter the conversation demanding proof of her capability, holding back any personal information and sceptically awaiting proof of her powers of divination. I entered open, giving her all the information I could, assuming that she may be able to help me think about a very serious situation I was experiencing. I recognised her capacity to engage in shared thinking, in collaboration and consideration. I engaged her to think with me and if that thinking was informed by something beyond the realms of the understandable then I wished to remain open to this possibility and honour her posited position.

I am asking myself how we could develop trust for our collective, communal, ancestral knowledge and sot a little deeper in ‘the uncomfortable unknown’. Easier words to say than do but at its best, creativity and the act of making art in collectivity, exercises these courageous muscles. This is what TanzKongress19 (see Blog #1) seemed to be attempting and something that I'm pursuing too in my practice The Bakery Of Slow Ideas and this current series of workshops.

Slowing to fall into the unknown, to lean into the unseeable, to hear the un-vocalised. In last week's workshop session, I shared a self-organizing Tarot process that offers a structure for the participants to read for each other. No prior knowledge of the Tarot is needed, but still using them as an intuitive devinational tool. Inviting participants to believe in their own power to playfully give creative council. To hold each other.

"We envision a meta-network, a new politics of engagement that draws in the non-activist and activist and helps them recognize the power they already are."
Bayo Akomolafe and Marta Benavides, Times Are Urgent: Lets Slow Down

I ran The Bakery Of Slow Ideas for a group of frontline NHS workers a few weeks ago and in the feedback a repeated statement was the nourishment gained in not knowing what would happen throughout the day, trusting and giving yourself up to the process. Maybe we can gain all the inspiration and courage we need, to dream into unimagined futures, from tools and technologies that our western, imperialist culture, obsessed with the future, planning, projecting and outcomes has degraded, subjugated and marginalised?

What tools would you pick up from the dusty ground beneath our feet?

Last Christmas my niece asked me to teach her and her partner to bake Sourdough bread. I also gifted them Andrew Whitley's masterful book Bread Matters (Andrew was the founder of the Real Bread Campaign and one of the original sources of my mongrel Sourdough starter) and we spent a very special day together baking. The hyped-up ongoing climate of confusion with ever-changing covid restrictions made spending time together over the last couple of years more difficult than usual. So this day of slow engagement, where we had time to play, chat, exchange and connect was healing.

At one point in the day our star signs came up as a playful topic of conversation and a family member who was passing through the kitchen, chuckled something like ‘oh not that astrology bollocks again’. That family member is open-minded and playful and swiftly made it clear he was fooling about. But in that moment I re-experienced Astrology too as a form of degraded knowledge and understanding, as is the Tarot and any divining form of council. Our connection to such practices have been continually and persistently weakened or severed entirely. Partially wiped out because they threatened an alternative to Abrahamic, patriarchal religious structures of perceiving, and were predominantly the realm of women who functioned on the margins or completely outside of the system. Then later suppressed because it was perceived as opposition to rational, atheistic scientific thinking.

The social theorist Silvia Federici in her book Witches, Witch-Hunting and Women, talks about the conscious creation of the archetype of the witch (as a tangible outcast). Those who were named a witch were any women ‘unkept’, or ‘uncontrollable’ by a man or the male societal constructs of the time. Any free-willed independent woman could be demonized in this way, demonized and ultimately destroyed by the patriarchy. Along with this suppression of liberated women in the middle ages, their folk knowledge, healing practices, ritual, and nature religions were suppressed, marginalized, or crushed entirely.

These facts are important to consider when grappling with how we attempt to repair our relationship with the ecology that we're a part of.

This blog is in recognition of the need to uncover and rebuild what our culture has attempted to destroy.